Since 1985 over 130 living composers presented 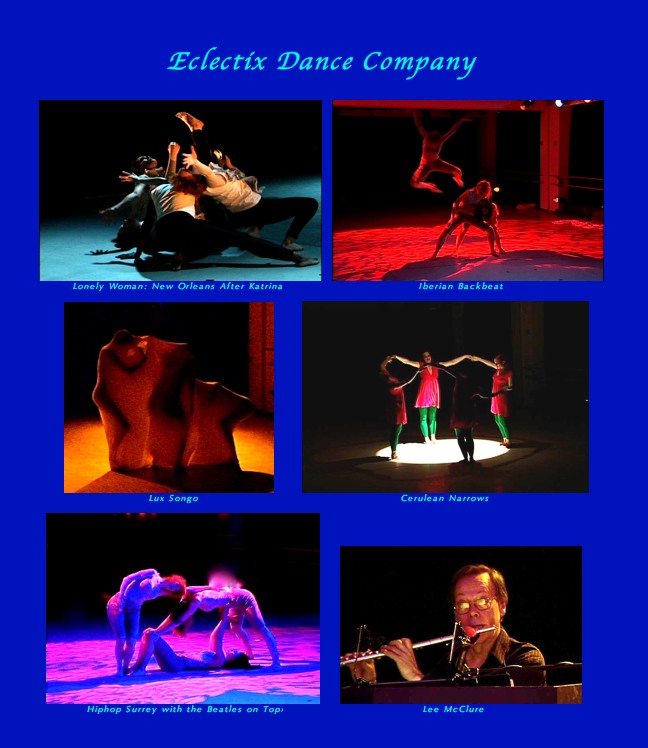 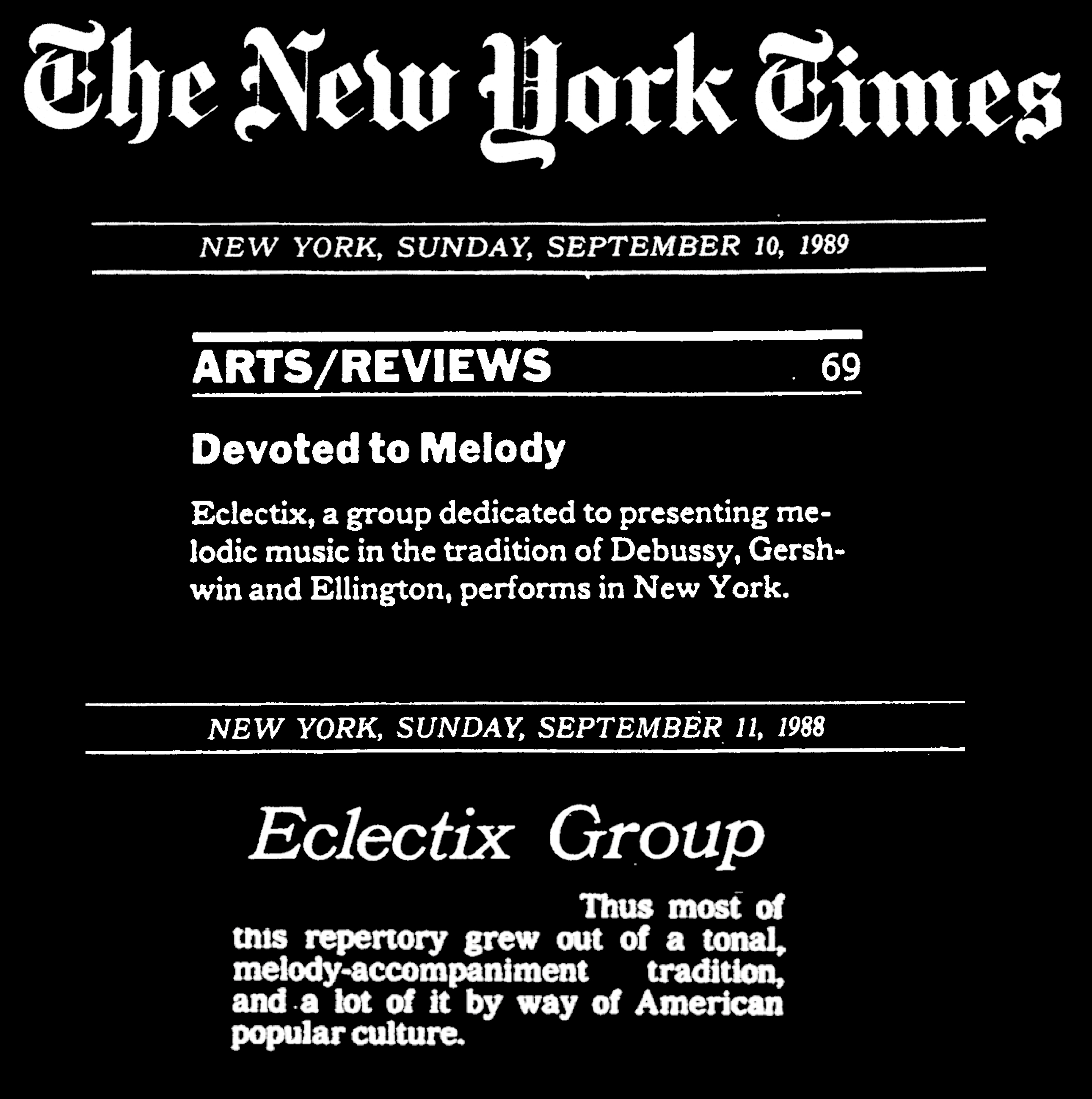 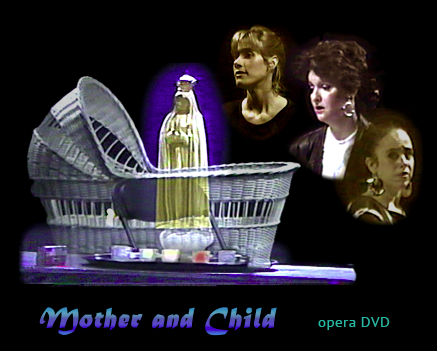 Lee McClure founded the Eclectix concert series in 1985 to present living melodic composers of both jazz and classical music and to revive the development of new works growing from the styles of Gershwin, Ravel, Ellington, Weill, and Copland among others. Lee contends that while Jazz has survived better, new classical melodic music almost completely disappeared from concerts after 1960. Of the 130 living composers that Eclectix has presented, 75% wrote new classical music and 25% performed new jazz works.

Now 72, Lee remains a champion of melodic composers at the Eclectix Chamber Orchestra, which is now (2020) hosting jazz groups curated by Roger Blanc at the Zinc Bar in Greenwich Village, NYC. From The Eclectix Stage is a collection of 18 recordings from concerts produced by Eclectix from 1985 to 2001. See the complete history of Eclectix on this site, as well as this list of all Eclectix Composers and these scans of reviews.

Developing the music of Gershwin, Ravel, Weill, Copland and contemporary Jazz, Lee McClure is one of the most melodic composers in the last 50 years of classical music. His music is distinguished by unexpected turns of traditional harmony and a lyric integrity imbued with undercurrents of searching.

JoAnn Falletta, conductor of the Buffalo Philharmonic Orchestra, has written about Lee's Symphony No.1:

I found it to be a really beautiful work! I look forward to studying it.

In 2019 Lee published his major works on archive.org. A well-categorized list of his works with links to recordings, scores, parts & videos is available on this site at McClure's Complete Works. (The links mostly go to Lee's Archive page for viewing, listening, & downloads.) See the Press Release announcing the publication.

In 2016 McClure published his Jazz Preludes for Piano as a CD and as scores ( here and here). Without improvisation, the 17 preludes are a captivating lexicon of jazz styles that bring new life to the legacy of George Gershwin.

Lee's classical works include two operas, symphonic, modern-dance and choral compositions. The first of his two operas, both with librettos by the Pulitzer-Prize-nominated playwright Ron Whyte, is Mother And Child. It was premiered at the Cathedral of Saint John the Divine (NYC). The Gregg Smith Singers premiered Lee's Litany to the Holy Spirit. One of Lee's major dance scores is Suite No.2 from The Voyage for two pianos. The Eclectix Chamber Orchestra's premiere of Hiatus was praised by The New York Times critic Tim Page, who declared: "it was probably the most distinguished piece on the program: the harmonies had bite and the musical ideas seemed both organic and Mr. McClure's own."

Lee's jazz works include his arrangements of well-known Christmas songs created for his 2008 CD, A Jazz Christmas Like You've Never Heard, which was played on 40 radio stations in the United States and reviewed in O's Place Jazz Magazine by Oscar Groomes, who wrote:

For sure Lee has managed to transform, twist and provoke our imaginations with this work. The music is great and the lyrics are familiar.


Starting in 1990, Lee began developing his self-designed electric flute, for which he has composed an extensive repertoire over 20 years. Playing a traditional silver flute into a microphone, Lee routes the sound through 12 processors and a sampler, which he controls with foot pedals. This produces repeating echoes, deep bass, 3-octave glissandos, complex harmonies, plus drum samples that can be faded in and out. In 2004 Lee produced his first CD, Lee McClure Electric Flute. His major works for electric flute include Rock Adagio, Metamorphosis, and Through A Glass Darkly.

In 2007 Lee founded the Eclectix Dance Company, for which he creates all the music on electric flute. He also conceives scenarios, choreographic concepts, and design for the lighting and costumes. The principal works that the company has performed are Lonely Woman: New Orleans After Katrina, Danse Nebulae, and Cerulean Narrows.

2019 marks the 25th year accordionist William Schimmel has presented in concert duets composed and performed by Schimmel and McClure.

As videographer Lee has created unique jazz and classical music videos combining recordings of his compositions with photomontages of landscapes and starscapes that interpret the nuances of the music. They can be seen on Lee's YouTube channel.

Other major works of Lee McClure include: Voice, his second opera; Elohim And Adam for soprano and orchestra; Cerulean Narrows for orchestra; Invocation for vocal octet; Ondine's Oasis for electric flute. As an author, Lee was invited to present his essay "The Separation of Art and Society" at the Society of Composers Inc's 1997 national conference in Miami. At Touro College, Lee designed and taught a survey course on American music. A recipient of numerous ASCAP Special Awards, Lee's compositions have been performed by: Old First Orchestra of San Francisco, Saturday Brass Quintet and The Accidentals. He has received commissions from the Janet Gerson Dance Company, the King David Orchestra, and the Breve Trio.

Born in 1947, Lee's first musical inspiration was at age 11, when he heard a jazz flutist perform live aboard an ocean liner to Europe. During his father's sabbatical in Basil, Switzerland, he began taking flute lessons. After his return to San Francisco in the 1960s, the jazz he heard in Sausalito and North Beach and the rock at the Fillmore Auditorium became major influences on both his improvisational and written compositions. The Modern Jazz Quartet's recording of Concierto De Aranjuez was seminal to Lee's concept of combining classical and jazz styles.

He studied at the University of California at Berkeley, the San Francisco Art Institute, and Berklee College of Music in Boston before moving to New York City in 1971. His fortuitous sublet of the apartment of a Manhattan School of Music piano student began his life-long study of Maurice Ravel, starting with the score of Gaspard de la nuit that he found in the apartment.

In New York, he studied flute with Patricia Spencer, and began his formal composition training with a three-year scholarship of private tutorials studying Schoenberg's Harmonielehre at the Turtle Bay Music School. Through the mentorship of his close friend, Richard Goldberg, he was introduced to the vibrant jazz and Latin scene in New York City, which continues to influence his music today. In 1979 he received his B.S. in music composition from Brooklyn College (CUNY), where he studied composition with Robert Starer and Charles Dodge.

During the formative years of Eclectix, Lee was married to Suzanne Kaufman, who gave invaluable support including photographing the concerts. Since that time his political involvements have included performing for the Dennis Kucinich presidential campaign, as well as volunteer work for Ralph Nader and Bill de Blasio. In 2009, on the steps of the US Capitol, McClure organized a group photo of US Representatives in favor of Medicare for All, which included Dennis Kucinich (OH), William Lacy Clay (MO), and Elliot L. Engel (NY).

In 2018, Lee retired from 45 years of driving a New York City yellow taxicab. Coming from an affluent white suburb of San Francisco, driving cab awakened him to social pressures and embedded racism which he has worked long and hard to recognize. One legacy of his years of cab driving that he takes particular pride in, is his extensive collection of graffiti photos which he captured between fares.

Though he uses his matrilineal name, McClure is the son of the late Rev. Dr. Arnold B. Come, Presbyterian theologian, Kierkegaard scholar, author, professor, and president of the San Francisco Theological Seminary in San Anselmo, California.